HOLLYWOOD, Calif. – The “City of Dreams, Movie Soundtrack” won the Soundtrack of the Year honor for its composer Mark Barnes of Port St. Lucie at the 21st Annual Los Angeles Music Awards in Hollywood.

Barnes, a long-time Treasure Coast resident who has previously received numerous awards for his work, was honored as Composer of the Year during the awards ceremonies at the Avalon Theater in Hollywood, on November 10, 2011.

Barnes’ newest CD “City of Dreams, Movie Soundtrack” received the nod for the award and was released on August 16, 2011. The CD, which is for the benefit of and distributed through the Port St. Lucie Historical Society is the music from the Society’s “City of Dreams,” a docudrama commemorating the life, times and people of Port St. Lucie. The movie, as well as the music, has received multiple awards to date. Barnes is a Society volunteer.

The soundtrack CD is a compilation of Barnes’ music and collaboration on the theme song (“A City Within A Dream”) between Barnes and two-time academy award nominee Carol Connors (“Rocky Theme” & Disney’s “The Rescuers”). The theme song was performed by local singing sensation Alana Ferraro with the Holy Family Church Young People’s Choir directed by Maria Romero with vocal coaching by Jackie Miedzianowski and background vocal by Melody R. Navarro. The theme was arranged and performed by Port St. Lucie’s Grammy-winning Robert Navarro.

A music video featuring the theme song, which was produced by Richard McAfoos and directed by Jose H. Garofalo & McAfoos, as well as the Soundtrack CD and Theme Song, are up for consideration in this year’s preliminary Grammy Award categories.

Barnes, also known as the BaD BoY of ChilL OuT, is an Ambient New Age musician.  A multiple award recipient, he was recognized with this award for the second year in a row. Among his other rewards are the Outstanding Soundtrack Award at the Live Nation-sponsored OutMusic Awards in New York City in May 2011; the Los Angeles Music Awards 2009 Producer Choice for Soloist of the Year; the 2008 Independent National Artist of the year award from the Phoenix Music Awards; and the 2008 Hollywood F.A.M.E. Award for Music & Cinema. 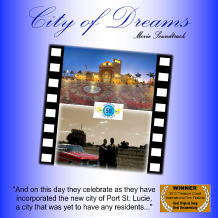 Connors, who resides in Hollywood, has a music history which spans many years, from her lead role in The Teddy Bears, a 1950s group started by the now-infamous Phil Spector and three friends, to her work on the timeless love song “With You I’m Born Again,” which was performed by Billy Preston and Syreeta Wright. She has composed countless music and lyrics for stage, movies, and TV.

The “City of Dreams” movie soundtrack CD, docudrama DVD movie and the Port St. Lucie Historical Society’s book “Port St. Lucie at 50: A City For All People” are available at www.pslhistory.org or The Shell Bazaar at 10100 S. Federal Highway (US 1), Port St. Lucie.

The Los Angeles Music Awards, which also include the Hollywood F.A.M.E Awards and Phoenix Music Awards, is a long-running awards show dedicated to furthering and showcasing the works of independent musicians and honoring those whose contributions have made a difference to the music industry.

More information can be obtained by going to www.markbarnesmusic.com and www.lamusicawards.com.

We seek to conserve our musical legacy, to serve our community, and create a vibrant future for our students through an intense and dedicated musical education.